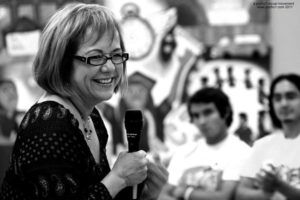 We had the privilege of interviewing Maria Elena Durazo in 2015, below are some excerpts from our conversation with her, where she provides insight into her journey and encourages Latinas to become organizers and politicians who lead by example.

Note: This interview was conducted by Nicole Castillo. It was edited for the sake of length, clarity, and consistency.

On getting started in public service

I was indirectly involved since…I guess I was in college. While I was in college, at St. Mary’s, there was a particular struggle with a tortilla factory, and they had to go out on strike and as students, we got involved as enrichment…having been a farmworker I knew about why the farm worker’s union was so important and what they were trying to achieve. I guess the answer is probably over 50 years…and then directly I became an organizer for a union when I was in my late 30’s.

On her work with the Democratic National Committee (DNC)

By the time I got to the DNC, I had pretty much spent all my life in the labor movement and the immigrant’s rights movement because, for me, the two together are what mattered. My parents and my older sisters came from Mexico, and we worked in the fields. What’s important to me and what’s important to my family and the values my dad taught me…I’d raise those same issues for all the right reasons.

There are Latinas in the labor movement who are leaders in their workplaces…and they weren’t always the leaders of the union. It used to be much more male-dominated. The largest local union is in Las Vegas, and that’s led by an immigrant Latina woman. She’s the president and principal officer, Geoconda Arguello-Kline. That has injected big changes. What is important to women? What is important to Latinas? Not only in the workplace but to their families. That’s one level.

I think with regards to Latinas in political office, we certainly need to see a lot more Latinas because if you look at civic life, non-profit organizations, there are Latinas all over leading those organizations. On the civic level, on the immigrants’ rights activist level, children’s organizations, there’s a number and it’s predominantly Latinas.

When you run for office you’ve got to raise a ton of money…and there are no longer limits like there used to be. You’ve got to play a political game that doesn’t feel like you’re putting your energy where you want to. Most of your energy is going into other things versus what are the right policies for our families? What are the right policies for our communities? What makes our communities healthier and stronger and better off?

On the importance of mentors

I think you can have a number of mentors for different reasons. I mention my parents because of their hard work and their values. Certainly, Dolores Huerta is a mentor…she turned 85 this year. It’s amazing how she’s still all over the country fighting the good fight on various issues. She’s not limited to one issue. I’ll tell you a quick story about her.

A couple of years ago, at the traditional reenactment of the march over the Edmund Pettus Bridge in Alabama, organizers had decided to dedicate one or two of the days to immigrants, which was really a big deal for the civil rights movement. I go in the night before and I’m going to be there the next day and walk. Turns out [Dolores Huerta] had been there from the beginning, and she was going to walk the 50 miles. I was so embarrassed. Oh, my God. Without saying anything, she put me to shame. She doesn’t preach or tell you how to do this or that, she just does it.

Her advice to the next generation of Latina leaders

I would say no there are no shortcuts. We each should strive for the highest quality of service to each other. You should become the best organizer that you can be, and get your hands dirty. Learn it. Learn it right, and that will stick with you for the rest of your life.